I picked up the Digigram VX222e because I wanted to show off an audio interface with open-source drivers and official support for Linux. Instead I found myself googling whether or not dumpster-fire was hyphenated.

You can control the VX222e directly with alsamixer.

The Digigram VX222e performs like any other sound device with pavucontrol.

In order to get usable audio from the VX222e with Jack2 the Period/Buffer needed to be set to 8. Anything lower would result in distorted audio or the VX222e failing to initialize.

The VX222e functions as a 2 in / 2 out sound card and that’s about it. I was unable to access the 3-band parametric equalizer or maximizer under Linux. The high round-trip latency with Jack makes the VX222e unusable for live monitoring post effects.

If your looking for a Linux compatible interface that can handle AES check out the MOTU 8D. 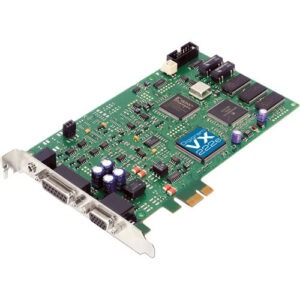 EQ and Maximizer effects are not accessible under Linux.

Buy on Amazon Buy on eBay