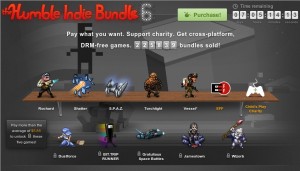 We’ve just added four more fantastic games to our latest bundle: BIT.TRIP RUNNER, Gratuitous Space Battles, Jamestown, and Wizorb! If you have already purchased the bundle, they should automatically show up on your download page. New customers can access them by paying more than the current average on the site.

All four added games are DRM-free and run on Windows, Mac, and Linux, come with soundtracks, and can optionally be redeemed on Steam and the Ubuntu Software Center!

BIT.TRIP RUNNER radiates charm and challenge with retro-styled, music-platformer gameplay. Players take control of CommanderVideo as he runs through more than 30 levels. Each stage features a unique music track perfectly synced to CommanderVideo’s hops and slides, resulting in a fresh and intuitive platforming experience.

In the sci-fi strategy game Gratuitous Space Battles, players outfit a complete fleet — from bulkhead-to-munitions — to clash mightily with opponents from across the galaxy. With layer upon layer of customization, master strategists will always be able to find a way to blast the competition into smithereens.

Jamestown is a beautiful shmup that brings neo-classical flavor to the grand tradition of scrolling arcade shooters. Up to four players blast and bullet dodge through a hostile Martian frontier, armed with the very best in steampunk weaponry. A “stay-alive” co-op system will have you screaming at your buddies during the epic, retro-style, screen-filling boss battles, while unlocking sick new ships and weapons.

In this RPG-infused block breaker by Tribute Games, take on the role of Cyrus, a wizard well-versed in the secret magic art known as Wizorb. Prepare to engage in an epic brick-shattering quest to save the Kingdom of Gorudo. Wizorb features beautiful retro graphics and a charming score in over 60 levels set over 5 worlds.