Hackwork is a new based 3D realtime strategy game in which you have to slip into the role of a hacker and control your army of viruses in a smart way in order to take over as many machines as possible. 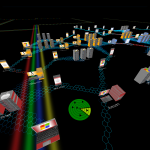 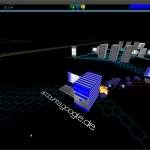 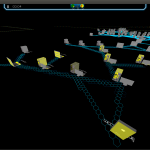 On your journey through the ‘net you have to take care of several parameters which determine the strength of the machines you want to attack and the benefit of taking them over, such as:
* CPU Performance – controlling the recovery-speed of the opponent-node.
* Connectivity – the number of yet invisible nodes that will be revealed when taking the node.
* The type of the system – Important servers have usually better security than some random desktop machines – but they are also more useful when attacking from them.
* The operating system – Different kinds of Viruses do different amounts of damage, depending on the target OS.
* Bandwidth – DDOS’ing a server with a smartphone seems pretty pointless.
Only if you can manage to correctly evaluate all these parameters, you can win against up to 7 AIs and beat the campaign.

Features include:
* Awesome soundtracks
* Ubuntu One synchronization of save-games and settings (for ubuntu users)
* Campaign in English and German (the story is specific to the Ubuntu App showdown right now, but that will be replaced in the future)
* Skirmish mode with up to 7 AIs
* It reads your Browser’s history (Firefox, Chrome and Opera supported) to use it for the host-names ingame and to determine which hostnames are especially important for you. Hosts that are visited more often will then be stronger.
* Completely automatically generated maps that can become arbitrarily big
* Compared to most other games that I played lately: a more or less decent resolution-management (simply resize the window to change resolution and fullscreen mode will not fill up multiple screens).
* Absolutely addicting (at least us developers just can’t stop playing – and we still can’t beat 7 hard AIs at a time).