Quote:
“It’s been a little over a week since we kicked off the beta, and we’re happy to report that it’s going well.

The Steam for Linux team and our game developer partners have been keeping a close eye on the discussions here. Participants’ feedback has been really helpful – keep it coming! The bugs reported in our sub-forum for beta participants have led us to focus recent work on the following areas:

For those readers who want to know more about the technical details of the limited beta, we’ve added read-only access (to all group members) to the Limited Beta sub-forum. This is a forum we’ve been using for bug tracking and we’ve gotten great response so far.

Although we’re primarily targeting Ubuntu 12.04, we also have testers using Steam for Linux on a variety of other distributions such as Arch Linux and Debian, with more to come.

Our beta remains small at this point due to stability issues. That said, recent incremental improvements in our client’s stability have enabled us to invite 500 more survey respondents to the beta this week. Next week, Ubuntu Developer Summit (UDS) participants will start joining the program and testing the client too. We’re thrilled to see so many Steam users excited to join in and help out. We’re working furiously to further improve stability and support for more participants. Stay tuned, as we’ll continue broadening beta access over the coming weeks.”

Yeah, not only do they know the Linux community is tinkering with the Steam client; they want to help out! Frank even notes “recent incremental improvements in our client’s stability have enabled us to invite 500 more survey respondents to the beta this week.” so keep an eye on your email. 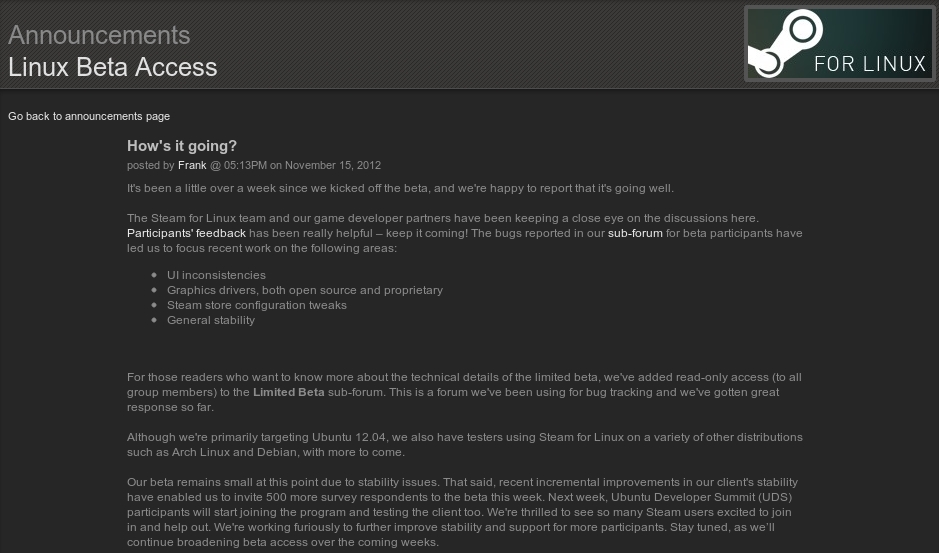