Linux Games Greenlight is a collection of games with confirmed Linux clients for the Steam platform. The list should remain useful until valve adds in a Linux tag. Please suggest missing titles in the comments. You can view the full list here. 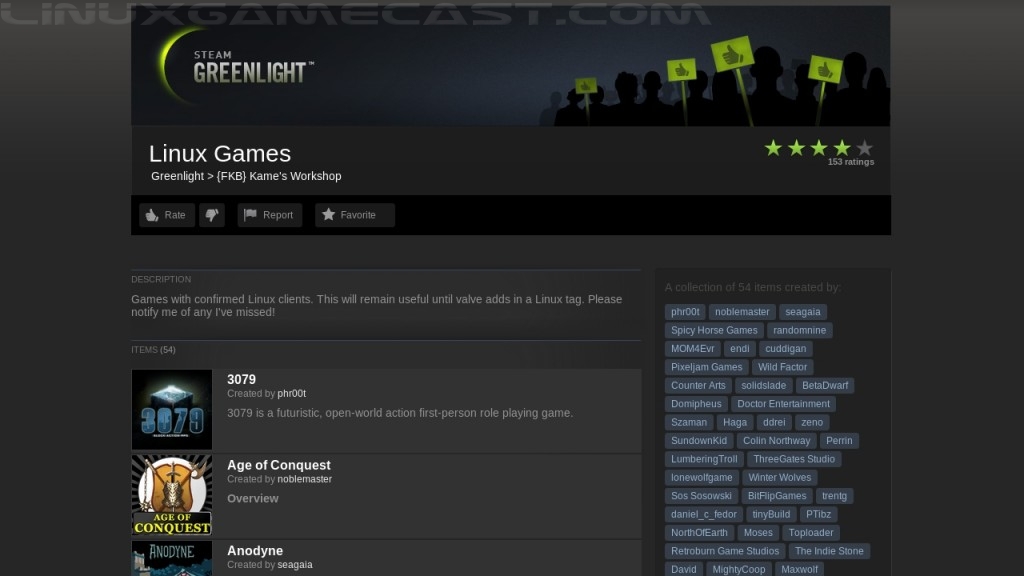 3079
Created by phr00t
3079 is a futuristic, open-world action first-person role playing game.
You arrive on a planet experiencing constant war. It is your duty to find out why the warring factions cannot find peace on their own & hopefully restore it yourself.

Age of Conquest
Created by noblemaster
Overview
Age of Conquest is a medieval Risk-like turn-based strategy game where you take the reins of a budding empire and struggle against fellow empires for control of the world. In one game, up to 100+ players vie for supremacy, but only one …

Anodyne
Created by seagaia
Anodyne is a 2D adventure Zelda/Yume Nikki-like, where you explore dungeons and passive locales located in the surreal, and occasionally disturbing dream world of a boy.
Anodyne stems from the the combination of ambiance similar to games like Yume Nik…

Chef Bereft
Created by MOM4Evr
Chef Bereft is a family-friendly 2D sidescroller from the oft-neglected 24-bit era of gaming. In it, you play as an amoeba-squishing, spoon-flinging cook out to SAVE THE UNIVERSE (Ok, maybe just the world, but you gotta start small, right?). Dash your way…

Dead Cyborg
Created by endi
“Dead Cyborg” is a first person view sci-fi adventure game for Windows, Linux and Mac. The story is about the meaning of life… and death… in a rusty post-apocalyptic metal and concrete world. Check the homepage for more information.