At the QuakeCon 2007, John Carmack, the lead graphics engine developer at id, said to LinuxGames: “I mean, I won’t commit to a date, but the Doom 3 stuff will be open source”. And like its predecessors, John Carmack has said that id Tech 4 will be released as open source. On November 22, 2011, Carmack released the Doom 3 source code on Github. On October 19, 2012 Carmack announced on Twitter “Got approval for GPL release of Doom 3 BFG code (minus third party bits)!”. 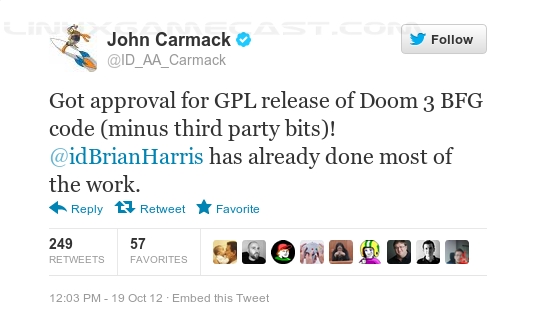 About:
The BFG Edition features enhanced graphics, better sound with more horror effects, a checkpoint save system, and support for 3D displays and HMDs. The game also includes the previous expansion Resurrection of Evil and a new single player expansion pack called The Lost Mission. Additionally, it includes copies of the original Doom (“The Ultimate Doom” edition with add-on fourth episode, Thy Flesh Consumed), and Doom 2 with the new episode “No Rest For The Living”, previously available for Xbox 360. The BFG Edition also features the ability to use the flashlight while holding a weapon, in the form of the so-called armor-mounted flashlight.