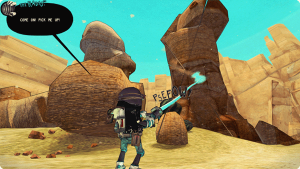 Tiny & Big: Grandpa’s Leftovers was developed by Black Pants Game Studio using their own native engine, which has been in development since 2002, and they’ve called it the Scrape Engine (which if you ask me it’s pretty damn fitting for T&B:GL). If those ten years between ‘02 and ‘12 did anything, was ensure all 3 of us at LGC could run it out of the box; just fired up Steam, push install, wait and play.

With the Makings of Work out of the way we kick into the Shiny category, this week Venn decided to add Sound as well. While not exactly an audiophile, our mostly benevolent overlord does like his beeps and boops and that’s where Tiny and Big fell short, with its repetitive music and the lack of voice acting (grunts and beeps don’t count). Jordan on the other hand simply didn’t think the graphics, crisp as they were, deserved the fabled third lawn chair. Me… Well, I’ve played some games that would fall far shorter in the audiovisual race and so I gave it the full score with the one caveat that you actually have to look for the cassette tapes to keep the repetitiveness of the music down to a minimum.

Kicking into the subjective realm, all three of us agree that it wasn’t perfect in our Fun and Controls category. Venn thought the Tutorial was unnecessary given the fact the very first level already provides with a run down of the tools, Jordan’s ADD kicked in after a few minutes of gameplay (means he got bored) and as for me, even though controller support was there, I couldn’t get my Dual-Shock 2 to work. Don’t get me wrong, the game does have some very fun mechanics and all three of us agree that the Omni-cutting LASER alone is enough to make even the skeptic inside prance around like a preschool girl.

For our Final word on Black Pants’ game, it gets a very solid pair of lawn-chairs which means that at $10 USD you should definitely check it out. Good job guys!

Released on Jun 19, 2012 by Black Pants Studios. It’s a comic styled jump and slice platformer with the unique ability to shape a whole world at your will. I.E. you cut sh*t up with a friggin “laser”

Linux:Tested on Ubuntu, Mint and SUSE, 32 or 64 bit. Please install the packages for OpenAL and SDL using your distribution’s packaging system.

Makes with the working: