Like most mornings I grab the tablet (while in bed) and check the L.G.C. mailbox, set it down and make some tea. Well, the miss decided to peruse our inbox while I brewed the wake-up juice. I hear “Tachikoma!” echoing throughout the house followed by “Mr. Batou! Come Look!“. Turns out the guys from Elefantopia studios sent over a beta of McDROID and it’s a FSM damned time vampire.

About:
McDROID is a fast-paced hybrid of third person shooter, tower defense, bullet hell and real time strategy with an undercurrent of wacky, surreal humour in a colourful world. Defend your shuttle against a variety of crazed alien species as they mutate, corrupt the ground or even turn your crops against you. Load up on weapons, bring your friends (drop-in/drop-out co-op) and take the battle to them. If it gets too crazy, turtle up behind your defensive perimeter and assume direct control of the lasers. 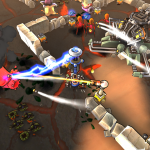 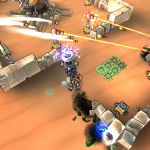 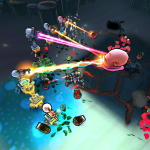 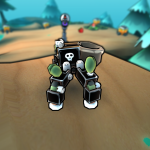 McDROID Beta 50% Off On Desura