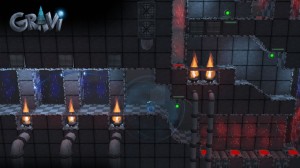 Hello again, boys and girls. This time around on LGC Reviews we took our butt rests to the Alpha build of Gravi by Hashbang games. To give you a little background, Hashbang is composed of just 8 people who describe themselves as being an indie game development company focused on delivering fun, entertaining and well polished games.

Judging from their website, Gravi is their first foray into the wild unknown that is the games industry. Our review coincided with their first Linux Alpha release, so take our score with an asterisk-shaped grain of salt.

In our Makes with the Workings category, both Jordan and Venn gave Gravi a perfect three lawn-chairs on accounts of it working out of box. On the other hand, I found myself looking at my wallpaper whenever that blue ball of fun misbehaved and hit the spikes that line the level walls. In a game that takes a lot of trial and error to master, you’re going to die and if you have to restart it every time you do it’s going to skew your opinion right off the bat. But before I get too much into that, it’s time to unfold the chairs on our second category. 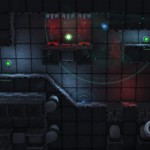 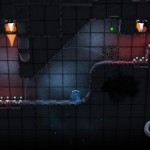 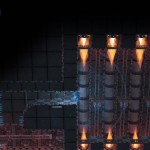 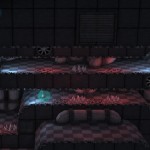 In the audiovisual corner we have the Shiny/Sounds category and this time around it was Venn who couldn’t bring himself to give out a perfect score. His reasoning behind not giving Gravi the trifecta, was that there were some texturing mishaps in some places and even on his monster PC the game hung around the mid 50s FPS. Neither Jordan nor I noticed any of those infamous textures and while the J-man said the game looked great for what it was, I found myself wondering if there was any background music (yes, yes there was). Even with my doubts as to existence of the background beeps and boops, I agreed with Jordan in that the third chair was fair.

And this is what it boils down to. When it comes to our highly controversial review system, what each of us thinks of a game will inadvertently dictate the difference a Nooope, Check It Out or a Shutupandtakeourmonies. On those rare occasions we find a certain score isn’t exactly fair to a specific game, we will append an asterisk to the final score to reflect that unfairness. Now that I’ve preemptively tied some of the loose ends of our subjective category, we may now delve into the Controls/Fun with minimal risk of being called out on our inconsistencies.

Our mildly benevolent overlord found himself struggling with a bug that caused Gravi to spit out those little shards of gravitational goop at random. According to Venn, when a game doesn’t behave as expected under Ubuntu 12.04 (Valve’s flavor of Linux), it’s not going to get away with it and that’s why Gravi only got a single lawn-chair from him. Jordan had to admit the game had some potential and if he had a lot of time to kill, Gravi would certainly fill it. As for me, like I mentioned earlier, the game crashed whenever the blue ball of fun hit the spikes and by the time I got to level 5, having to restart the game after every death I had had enough. Still, being the one stuck with an AMD 5650HD Radeon graphics card I chose not to blame the game too hard for not working properly on my end.

When all chairs have been counted and neatly folded back into place, Gravi averaged at one lawn-chair. I hope you haven’t forgotten what I mentioned in the paragraph before last. We all agreed that one wasn’t particularly fair for this game. Our final word is that Hashbangs’ alpha build didn’t quite hold up to a two chair rating, but it came damn near close and so it gets one lawn-chair with an asterisk.

The game has since been finished and some of the problems we encountered have been corrected, so if you’re on the fence about this one, for €6.99 or $9.99 USD you can see for yourself.

P.S.: The game currently averages at 8.9 on Desura so you should definitely check it out.