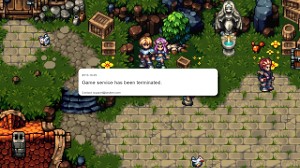 If you’re wondering, that stands for Massively Multiplayer Online E-Peen Swingin’. Without further ado, onto the matter at hand.

Millions of years ago in the future (Weekly Episode 35), Linux Gamecast ran a little piece about a browser MMORPG called SEYKEN: Crystal Kingdom. Of the whole of the LGC crew, it was I who found the game itself to be even remotely interesting. Given Jordan’s inherent hate for MMOs and Venn’s derision of pixel graphics, I was the lone voice of cautious optimism for this game.

What’s far more interesting is that almost 10 months later I received an e-mail from Presbyter, the game’s lead developer, regarding a Cease & Desist order. Said C&D was sent by one of the Pixel Artists involved in the games graphical design, Cyangmou.

The very first e-mail reveals close to nothing, except Presbyter’s own concern. He also advises anyone that has “got a site or whatever showing his art” to remove it immediately, under the threat of getting a C&D as well. Thankfully LGC’s coverage of the game falls under the Fair Use license, since it falls within commentary, review or critique. So we’re in the clear, lest this article sparks Cyangmou’s ire.

The second e-mail, besides being painfully long, describes that Cyangmou wants due compensation for his work. Presbyter does say both parties had already come to a sort of agreement regarding this, apparently it was just taking too long and you don’t fuck with people’s money.

Now you maybe starting to side with Cyangmou at this point, but if you force yourself to read the rest of the e-mail you’ll see that he is not exactly without fault. In fact, according to Presbyter, he breached several clauses of the original agreement. Not only that but he received at least $10,000 US for his services, with more on the way from donation and in-game microtransactions.

Presbyter did what he could and nuked the game.  Even the Steam Greenlight and IndieDB pages have taken the hit.

On one hand this Mexican is sorry to see the game go.  On the other hand, this is the most interesting event regarding SEYKEN: Crystal Kingdom in the past 10 months. I’ll keep this article up-to-date as the situation develops.

We Suck At – Hollow Knight