The fine folks over at /g/ are working on a GTA inspired top-down where you play as RMS. Team up with Richard Greenblatt, Tom Knight, Bill Gosper, Eric S. Raymond and, Linus Torvalds and fight the evil Corps like Microshaft and, Crapple.

Well, that’s the plan. Right now it’s little more than a functional prototype but check out the TODO for a taste of what’s to come. 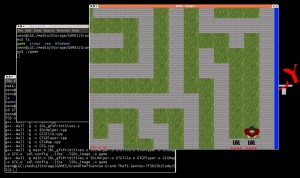 About:
Richard Stallman (RMS) is a programmer and hobbyist hacker whose only love in life is freedom. He dreams of a world in which the user has control and is able to change software to fit his needs. What stands in his way is the large and evil Corps such as Microshaft and, Crapple. People such as Billy Fence (the owner of Microshaft), Stephen Works (of Crapple), Mark Rocketvalue (of Ubongo) and, Steven Sphearmor (also from Microshaft) are out to stop our hero RMS. In this game the goal is to free the world and take down the large corps. You team up with people such as Richard Greenblatt, Tom Knight, Bill Gosper, Eric S. Raymond and, Linus Torvalds just to name a few.

LWDW 163: Devil In The Stallman